History comes to life Out of the Past


Out of the Past Amazon link Barnes & Noble  iTunes link

I splayed my hand over the first page of the album and looked up into his eyes, slightly embarrassed, knowing that this guy was about to realize that his newest client is a total nutcase. He had no idea of the extent of my obsession with this house or my family’s history, but he was about to find out.
“First of all, I want you to know that I have hounded every poor unsuspecting relative living within a five-hundred-mile radius of here to gather these,” I admitted with a short laugh. “And I do feel more than a little guilty about that and I’m pretty sure that I’ve been disowned by at least a few of them, but look at all this!” I said excitedly, ruffling through the pages.
“I have any and every photograph that I could find of the house as it had looked in the late eighteen hundreds, at the turn of the century, and during the early nineteen hundreds when, somehow, my grandfather’s family came into possession of an early Kodak Brownie and they took shots of the barn, yard, porch, front room, and the kitchen when it had been complete with an old cook stove, farm sink, and indoor water pump.”
“Oh wow! That’s perfect. It shows every detail!” Dave burst out excitedly when I flipped to the first photo behind the tab labeled ‘Front Porch’.
I grinned up at him; a little surprised but very pleased by his reaction which was much as mine had been when I’d first seen some of these. It was easy to tell that his excitement was genuine.
“I know. Isn’t it great?” I turned the album so that he could get a better look. 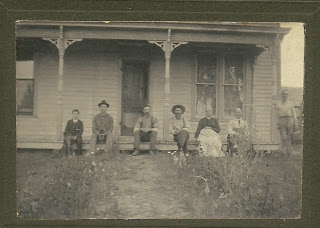 The photograph was one of those from around 1910. The shot was taken from out in the front yard, looking toward the house. Seated along the porch were my grandpa Arlan, when he had been approximately twelve-years-old and sitting between his knees, was his favorite dog that he seemed to always have with him in many of the photos from that time period. Also in the photo were two of Arlan’s older brothers, Robert and Albert; my great-grandparents, Henry Mills and Alice Wyman Mills; and Alice’s mother, Rose Simpson Wyman who was my great-great-grandmother and the original owner of the house that I now own. She passed away at the ripe old age of ninety-seven back in the year 1927. Finishing out the photo was Great-Grandfather Henry’s older brother, Peter Mills, who is a bit of a mystery and was standing almost out of the shot to the far right side of the front porch.
“It’s so amazing to think that this is exactly where they were all sitting, right here, a hundred years ago,” I marveled, glancing around the expanse of the old covered porch.

I held the photo album out in front of me and moved around the room until I was lined up exactly with the windows and fireplace visible in the tintype photograph. This was an older photo, taken around 1883. My grandfather had told me once that early photographers would travel around entire regions, making their living by charging for tintypes and leaving behind these little gems that were glimpses back in time and would ultimately become family heirlooms. 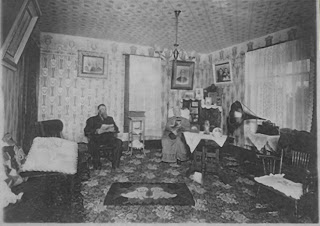 The time frame fit with the subjects of the photo. My great-great-grandma Rose and her husband Judson were seated in matching bent cane rocking chairs. Rose was posed as though she had just looked up from reading a book that was open on her lap; Grandpa Judson was clutching the arms of his rocking chair and staring the camera down, very stoic and proud.

I turned to a photo of my great-grandfather Henry Mills sitting on a white-washed wooden bench in the midst of abundant flowers. 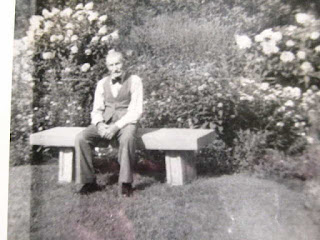 The photo had been taken the same day as a group shot of the entire family which had included three generations of Wyman and Mills relatives, all standing out in front of the house and surrounding a tiny and frail looking Grandma Rose as she had sat in a bent cane rocking chair in the foreground. 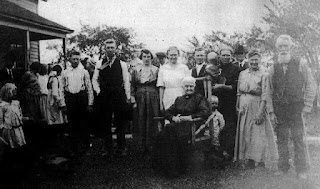 I happened to be at Rose’s house when a family photo had been snapped in 1914. I had already known all about the photograph that was being created because I have the original in my possession. It is a photo of about twenty-five relatives standing in three rows on the back steps of my house, like standing up on risers. It had been surreal to actually watch the staging of the photograph, as the family had gathered together, with all of the confused hubbub that goes along with arranging such a large group of people into some semblance of a structured pose. A neighbor man who had happened to be visiting that day had been the one who’d done the honors and had snapped the shot for posterity. 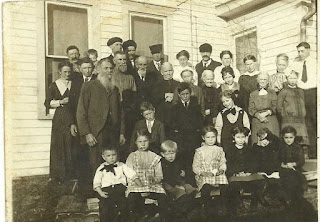 Cedar Township Cemetery is the resting place for three generations of my dad’s side of the family. The Mills plot is just to the left of the main gate and stretches in a long row from north to south. First is my great-great-grandfather Francis Mills, the patriarch of the Mills clan, who shares a headstone and resting place with his son Peter. Beside them are my great-grandfather Henry Mills and his wife Alice Wyman Mills and next to them are some of their eight children starting with the youngest, my grandpa Arlan and my grandma Virginia, who died long before I was born and actually; Grandpa and Grandma had moved to Des Moines in 1917, where they’d lived and died but per their final wishes had been brought back to Fremont for burial. On down the long row were some of my grandpa’s seven siblings Wyatt, Albert, Robert, Lucy, Molly and many of their children and grandchildren. 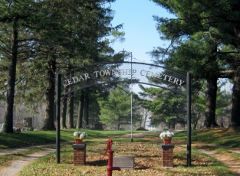 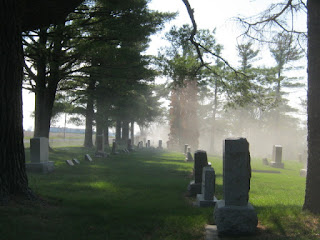 Posted by Dana Roquet at 5:05 AM No comments:

Promote Your Page Too